We produce in the following material versions:

Valve construction ZPB-K is based on a two-part design, consisting of cast iron body and base. Inside the body is located rubber insert called „diaphragm”, which the sealing element of the valve. Diaphragm clamp is obtained through pass two bars working in the body: bottom up and top down. While the movement of the bars is caused by turning the wheel. Closing the valve is done by turning the wheel to the right. Diaphragm valve type ZPA consists body and diaphragm.

Placed inside the body that work together. Closing the valve is done with pressing on the diaphragm head to the body’s habitat. From both sides completed cast iron flanges  compatible with PN-EN 1092-2
How the shut off / regulating valve can be controlled:
– the wheel – manually
– electric drive: ZPE, ZPB-P
– pneumatic drive: ZPR, ZPB-P

Diaphragm valves may be install in vertical or horizontal pipelines in any position. However, you must remember, that the elements work on laminar flow, so much prolong work time this parts and their life, especially, when the medium contains solid abrasive particles.
Nominal pressure: PN6, PN10, PN16
Working temperature: ZPA: -5°C ÷ + 65°C
ZPB-K: -5°C ÷ +75°C; -5°C ÷ + 110°C
Making diaphragm valves for other temperatures requires individual arrangements
Application
Diaphragm valves are designed for work as a closing equipment, with media like:
– cold water
– hot water
– acids/ alkalis
– mineral oils
– strongly abrasive media, strongly contaminated media,
– slimes
Other media after consultation with the producer. 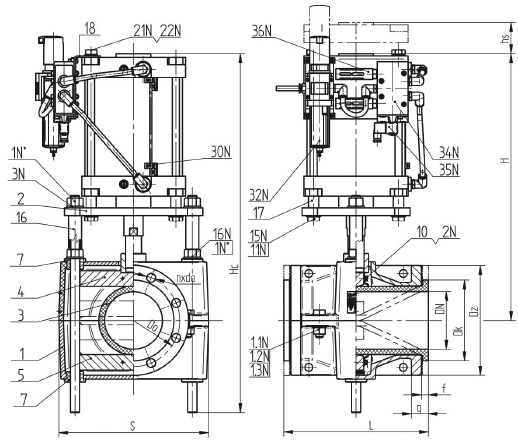 Do you have any questions?
Write to us Download
Specification